Big, Mean, and Green: How First-Time Self-Storage Owners Are Winning the Game 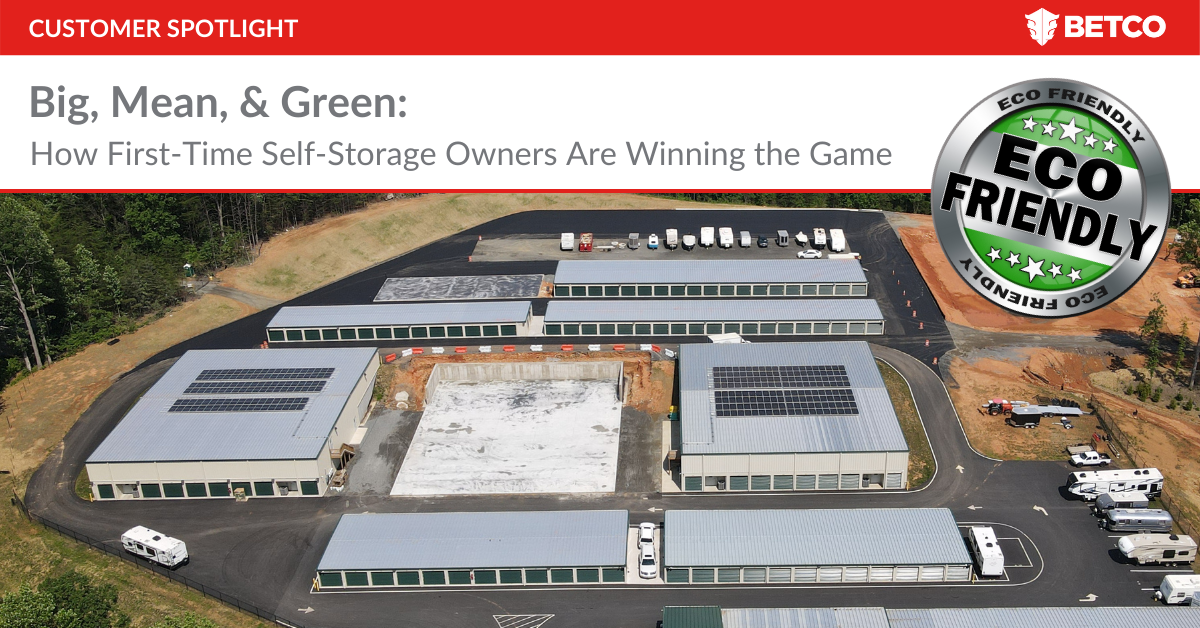 It’s no secret that self-storage is one of the most successful business ventures, and that’s proven to be true for Ruckersville Self-Storage, located in Central Virginia. First-time self-storage owners Darrell and Brandon Payne are a father-son duo that have found major success with their first facility.

It Runs in the Family

The Payne family are no strangers to hard work and perseverance. With a joint history of military service, both Darrell and Brandon also have an extensive history in running several successful commercial businesses. With a strong background in customer service, and a passing suggestion from an uncle that owned a self-storage facility, it was a no-brainer for the men to start researching the industry and scouting out the perfect location for their first facility. Once they found the prime piece of property, and acting as their own general contractor, Darrell designed a multi-phase facility that fit perfectly into the landscape.

While researching the self-storage industry, they were also looking for the best partner to assist with their project. After attending trade shows, and talking with several construction companies, the pair were heavily considering partnering with BETCO after meeting with Matt Maurer, BETCO’s lead representative for the state of Virginia.

Not only was BETCO’s North Carolina headquarters in such close proximity to the project, but as an industry leader, hearing feedback from previous BETCO customers and seeing the success of other facilities built by the BETCO team was enough to seal the deal.

While the land procured for this self-storage project was the total package in terms of size and location, it did need some preparation. While preparing the land for construction, Darrell and Brandon ran into a few snags such as solid rock, hindering pine trees, and… rooted fiberoptic cables? That’s not something you encounter every day, but the father-son team didn’t let that hinder their self-storage vision.

The road front of their property sported 55 pine trees that, unfortunately, were located within 10 feet of the powerlines. This meant that the trees had to be removed, but the local power company had to be the ones in charge of the removal. However, once the trees were cut, the problem didn’t end there. Fiberoptic cables were woven throughout the roots of the trees. The preparation was again put at a halt until the Wireless Network Operator sent an approved engineer to successfully remove the fiberoptic cables from the tree roots. 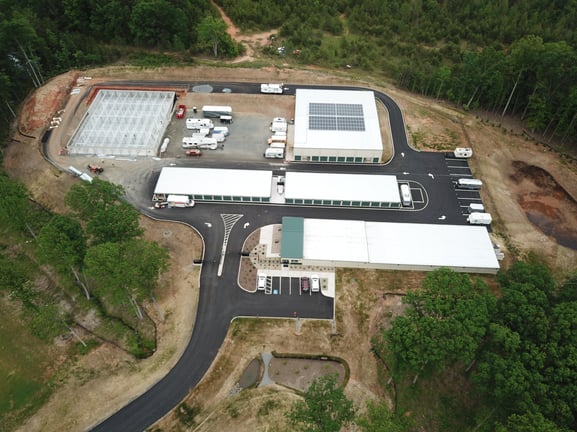 To add to the frustration, the area where the building pads were to be placed was made of solid rock. Although blasters had previously worked on this area, there was still up to 4 feet of solid rock in some places, and there were huge boulders left behind. To solve this, another blasting company was brought in to blast the remaining 9000 cubic feet of rock, and a rock crusher was used to break up the giant boulders. In light of the hang-ups, Darrell and Brandon were able to spin this in a positive direction by gaining approval to use the crushed rock as compactible fill for the road to their facility.

With the property ready to go, it was time to put the plan into action. Darrell’s original multi-phase plan anticipated a 7 year build out, totaling 92,000 square feet. Working with BETCO, the first phase was completed, and Ruckersville Self-Storage was in business in the fall of 2019. Boasting 36,000 net rentable square feet plus a 1000 square foot office, the self-storage facility easily brought in tenants and was an instant success.

The grade of the land naturally lent itself to bi-level buildings, so in early 2020 phase two construction began, which consisted of three bi-level storage buildings built into the hillside, each totaling 24,000 square feet. Next was phase three, which included three 17,000 square foot single-level buildings. With the help of BETCO’s on-track project manager, Nick Savage, phase three was completed in 15 days. 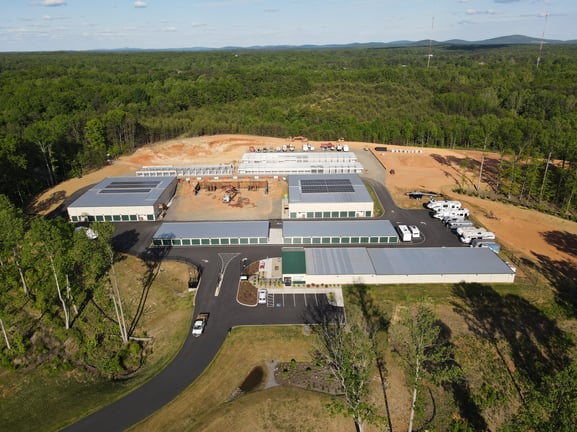 Currently, Ruckersville Self-Storage has 600 total units. Due to the immense success of their storage business, father and son recently acquired another 5.5 acres to continue expanding their facility.

As an added bonus, Ruckersville Self-Storage is an eco-friendly facility. Solar panels were installed on two of the bi-level buildings and gathers enough energy to power the entire facility. Being 100% solar powered is beneficial in many ways. Not only does it lower utility costs for the facility, the solar panels also have a  30-year life span and garner additional tax breaks for the business, which helps to negate the initial cost of installation. 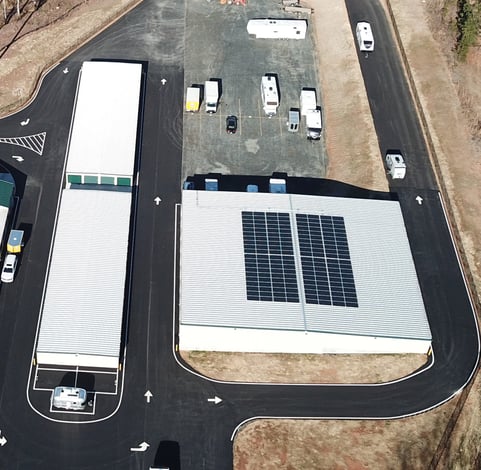 Why is This Self-Storage Facility a Standout?

Not only is this facility skillfully designed and artfully constructed, but it has additional features that make it an outstanding facility. Ruckersville Self-Storage is known for its beautiful curb appeal and well-maintained facilities. They also added security measures like code-protected entry and exit gates. During the design phase of the project, Darrell made sure to include travel ways large enough to accommodate full size moving trucks, as well as full size tractor-trailers, which is an added benefit for many tenants.

One of Ruckersville’s strong suits is their outstanding customer service. With his previous experience in running multiple storefronts and owning a customer service call center business, Brandon is onsite each day, managing the day-to-day operations of the facility and assisting customers. They’ve also provided a website that accommodates online rentals, as well as employing a third-party call center so that tenants can reach someone at all times. 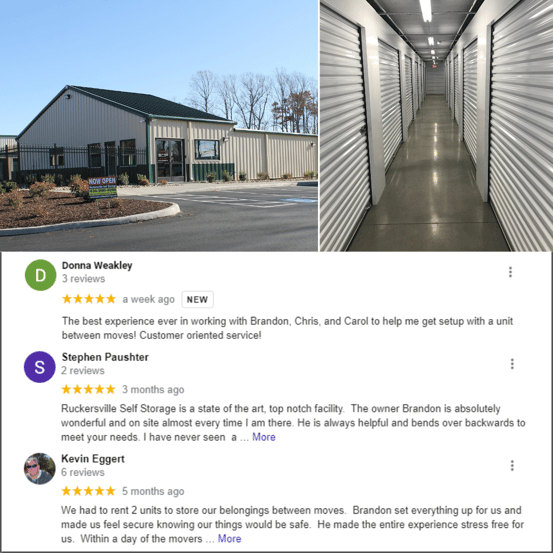 Want to know more about BETCO? Watch our video to see why we're the most trusted partner in the self-storage industry! 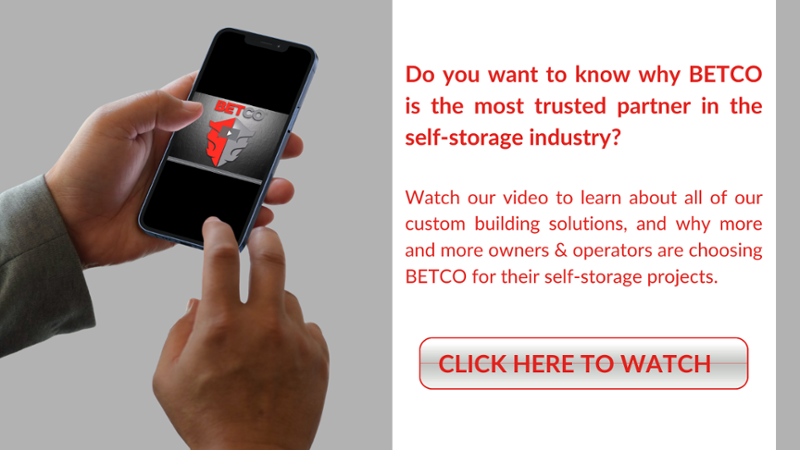